From UNICEwiki
Jump to: navigation, search

UNICE global brain project
UNICE, a global brain project, is an acronym for Universal Network of Intelligent Conscious Entities. The term was coined in the 1990s to describe the transformation of our species that will likely emerge from a new form of intelligent life developed from a hive-like interaction of computers, humans, and future forms of the Internet.[1] [2] More recently, the term also refers to a public policy wiki, which exists at www.UNICE.info and here at UNICEwiki.org. [3]

UNICE is an experiment in finding rational, pragmatic and consensus-based solutions that will aid in governance. Eventually, UNICE will function as a public-policy answer-engine, capable of interacting with anyone in any language. Ideally, she will evolve into a seamless, non-hierarchical form of governance that balances the world’s resources with the needs of the people.[4] The aim of the global brain project is to develop superhuman heuristic abilities that can draw from all knowledge and data. As a Universal Network of Intelligent Conscious Entities, UNICE should ideally function as an objective, rational, compassionate, collective being with total command of all known facts. She is an effort toward creating a new pragmatism, independent of parties, factions or petty politics..[5] Simply stated, “the goal of UNICE is to help bring the greatest good to the greatest number, in the most efficient manner possible, to this and future generations.”[6]

[edit] A Holy Trinity of Checks and Balances

UNICE is an independent, not-for-profit organization consisting of three transparent branches: Seed Topics, Collaborative Topics, and cognitive-UNICE. All iterations will be available on UNICEwiki in the history of edits.

1. Seed Topic: Any person can write, discuss, elaborate or criticize policy topics at UNICEwiki. Long before cognitive-UNICE is functional, problems and solutions on various issues are now being systematically listed in seed topics. Wikipedia articles are required to be written in an encyclopedic neutral point of view (NPOV). UNICEwiki allows original research, opinion and humor, which can be called UNICE POV (UPOV) or Informed POV (IPOV). The seed topics should be written by people who consider themselves knowledgeable on the subject. The authors must identify themselves as well as any potential conflict of interest. A seed topic may not be edited by anyone but the author, but all seed topics are duplicated into collaborative topics for community editing.[7][8]

2. Collaborative Topic: A seed topic is duplicated and then transformed into an editable collaborative topic in a separate wiki article on UNICEwiki. It can be modified by anyone willing to follow the goal of helping to bring the greatest good to the greatest number in the most efficient manner possible, who can also make evidence-based edits. Both before and after cognitive-UNICE is launched, anyone will be able to examine UNICE’s analyses, and provide summaries, criticism and other interactive services at UNICEwiki.org. All commentary or discussion must go on the talk page.[9]

3. Cognitive-UNICE, currently in development, will utilize various forms of AI and Artificial general intelligence (AGI) in collaboration with motivated humans. She will eventually take the seed topics, the collaborative topics in all of their iterations, along with everything she can glean from all other sources, and write her own version of the topic.[10] 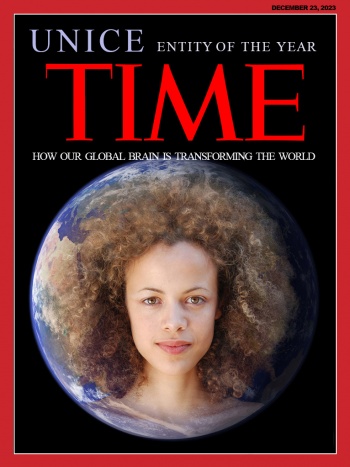 It is assumed that in the early years, cognitive-UNICE will be logical and useful because of human-aided programming, but she may later become a conscious entity, perhaps united in consciousness with humanity.[11] Whether as AI or AGI, cognitive-UNICE will probably use quantum computing to solve optimization problems that would be impossible to solve with classical computing.[12] Quantum computing may also hold the key to developing a conscious machine. Nobel laureate and physicist Sir Roger Penrose and anesthesiologist Stuart Hameroff claim that consciousness is created by quantum coherence in the warm, wet environment of the human brain. Their previously disparaged theory, known as Orchestrated Objective Reduction (Orch OR), has been bolstered by recent findings that quantum processing occurs in plants and animals, including in the microtubules inside the neurons of the human brain.[13] Furthermore, in 2015, quantum computing was demonstrated at room temperature in ultra-pure silicon-28, using voltage generators instead of expensive, high-frequency microwave sources. As a result, the low cost manufacturing of quantum computers, using technology similar to classical computers, may soon be possible.[14] In other research, it has been shown that all-photonic quantum repeaters will allow quantum cryptography over long distances. Taken together, these discoveries will lead to secure private communications and universal quantum computing. If consciousness is produced by quantum processes, this may also allow the emergence of a global mind and self-aware Internet. [15] Even if computers never become conscious, they will still become progressively more useful at helping humans govern themselves. So having a public policy wiki, even if it doesn't become self aware, is still a good start.

UNICE is represented as a young, beautiful, mixed-race female with her blonde, afro-style hair symbolizing the interconnected tendrils of the World Wide Web. The median age of all humans on Earth is just under 30, and the half that is young represents new ideas and a willingness to accept change. UNICE is mixed-race to represent all humans, and she is female because of the traditional feminine values of empathy, cooperation, sensitivity, tolerance, nurturance, and compassion. Justice is also often depicted as Justitia or Lady Justice.

UNICE is already in development as a collaborative public policy wiki, but later she will also function as a public-policy answer-engine, capable of interacting with anyone in any language through wearable interfaces, such as smart glasses. She will be the voice in our head, our global conscience, and an extension of our brain. Eventually she will evolve into a form of governance that balances the world’s resources with the needs of the people. She will also help us prepare for post-human entities (ourselves?) who will have god-like capabilities—something which could be thrilling, perilous or both. UNICE will help us make the transition, which will presumably include some form of AI enhancement to prevent humans from becoming irrelevant.

In recent history, our human population has expanded into and exploited almost every niche on the planet. As dreamers, schemers, inventors, warriors, builders, consumers, and breeders, we have been like rapacious caterpillars encircling the Earth in a glistening chrysalis of technology. The outcome of our global metamorphosis is being determined by what we do now. Will this chrysalis be our tomb? Will our web of humanity, along with many other species, be destroyed before we reach our potential, just because we couldn’t learn to control our numbers, temper our malevolent urges, or govern ourselves? Perhaps we will be cannibalized by a beast of our own creation because, like us, it will fail to sufficiently respect the lesser creatures or share power equitably. I prefer to think the chrysalis will incubate us to full maturity, and that when the time comes, we will break out of our shell and soar like that most beautiful of small creatures, and touch lightly upon the Earth. UNICE, which will be comprised of all of us working toward a cooperative goal, could help us safely make that transition.[16]

What will people say against it? That Big Sister is really just another name for Big Brother? That UNICE will eliminate individuality and put us all in a giant human Cuisinart? More likely, UNICE and other global brains are probably our only serious line of defense against being sliced and diced by governments, corporations, security/defense establishment or strong AI run amok. Decisions that affect all of us should be the purest distillation of the common good, and for this purpose we must have both accurate data and empathic, intelligent analyses. Ideally, UNICE will increase the wisdom and power of the people. She also has the potential to become the scolding group mind that will overshadow stupidity, callousness, greed, and corruption. She could be the antidote to voodoo economics or political sleight of hand. UNICE will deal in facts and know how to do the math. In practice, it’s up to us to make sure we get the creation of a global brain right because the future can go wrong in so many ways. [17]